As we have in the past we have really out done ourselves this year with the amazing artists we have joining us. with some returning mixed with a touch of new, this championship will be just as breath taking as it is every year!!!! We are so exited to see what master pieces our carvers bring to life this year. So without further ado the list for the 2021 International chainsaw carving championship are listed below. Congratulations and good luck!!

Adrian is from Villa Elisa in Argentina.  He is returning for his 3rd year.  Adrian has been competitively carving for about six years.  He began his career building wooden toys and small hand carved pieces.  Adrian has traveled around the world carving and he says this is all due to the chainsaw carving world.  He says chainsaw carvers are like a big family and he is proud to be part of the family. 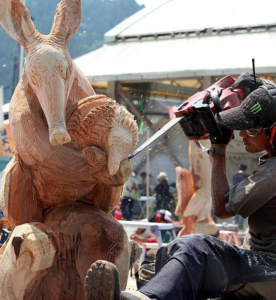 Takao Hayashi born in 1972, began working as a salaryman and log builder in 2002.Since then he has been winning awards all around the world and impressing judges and audiences alike with his unique style and exquisite detail. His hobbies are chainsaw carving and occasional mountain bike rides. He enjoys the downhill at the local Tokageamine. “I want to make a smile for sculpture.” 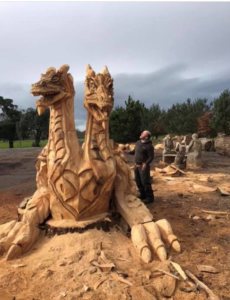 John is coming to us for the 3rd year from Waterford, Ireland and bringing lots of energy to our event. He has not been carving long but brings an enormous amount of talent.  He first gained attention when he carved a very old and large tree located on the grounds of Fenor church. He transformed this into what is known locally at the Angel Tree.  His world record breaking sculpture from one piece of wood called Dragonslayer can be seen in the Waterford Viking Triangle.  He has taken part in numerous shows and is currently competing in Lithuania. We are looking forward to what he will be carving this year and the story behind the piece. 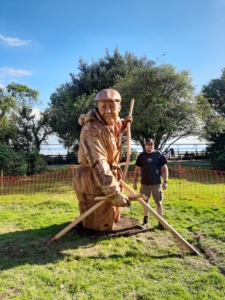 Chris has been a professional artist, working with different materials and techniques for around 20 years. He grew up using chainsaw for cutting firewood, but he always had a passion for art and wood carving. After a few years of exploring different techniques in painting and sculpture, Chris met a chainsaw carver at a life drawing class in the 90s. He inspired Chris to give chainsaw carving a go, Chris took to it immediately. Since then he’s carved hundreds of sculptures using a chainsaw combined with traditional wood carving tools and he has loved every minute! Most of Chris’s sculptures are figurative but he also loves to carve animals; Celtic & mythical pieces, dragons, abstract work, or whatever inspirers him at the time. 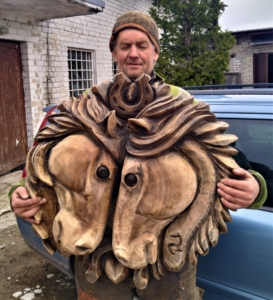 I’ve been working with a chainsaw for 31 years. I worked as a logger for ten years. I’ve been a carpenter for fifteen years. I made forest furniture, resting areas, cross the wooden bridges and stairs and gazebos. Eight years old I started chainsaw carving. I like to do burning sculptures at various festivals for the audience. I studied forestry and landscape architecture. In the international carving festivals I started in 2016. 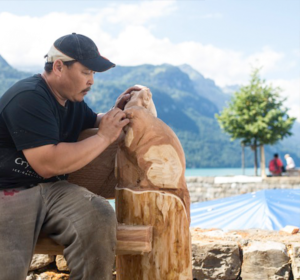 Born Lkhagvadorj Dorjsuren, he now goes by his Alaskan given nickname “George” which he earned at the World Ice Sculpture Championship in Fairbanks, Alaska. The volunteers nicknamed him “George” because of the difficulty they have pronouncing his Mongolian name. Like everything else, he accepts it with a grin and gets right back to work. George was the first Mongolian to carve ice as an art form.

Marina was always amused by art. she meddled in various mediums never really finding the one that was to be hers, until she was mesmerized by a hand carved Japanese Dragon. She at once took initiative to find where she could learn to express herself in such a way. Marina picked up her first chainsaw on April 9th, 2016. It was 2 months later that she entered her first competition. She had entered the novice category which did not have a ranking. It was all for the experience and wisdom of fellow carvers. Since that competition in June 2016, she has been involved in other competitions and events around the world such as Australia, Alaska and of course throughout British Columbia and Alberta. 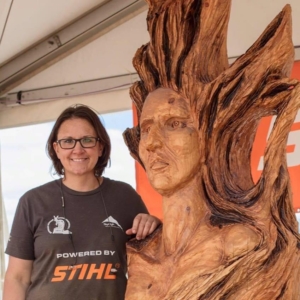 Molly started carving the summer of 2008 when a local event needed carvers. She has since traveled all over the US for carving events from Pennsylvania to Washington State, placing 3rd at the Scandinavia Corn Roast in 2018, and 3rd in Semi-pro in Reedsport in 2019. Molly also traveled internationally when she was accepted into the Australian Chainsaw Carving Championships in 2017. She loves carving Minnesota Wildlife, water, and people. She is a full-time art teacher at the Bemidji Minnesota Middle School. You can see more of her work at wistewoodworks.com or on Instagram or Facebook at Wiste Woodworks. 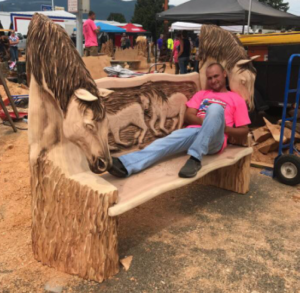 Alex was born in Moldova but now resides in Washington and is returning for his 3rd year. He became a professional carver in 2014 after taking 1st in the semi-pro division that takes place in Reedsport. Alex has a studio in Yelm and is a full-time carver.

Bingo is from Zimbabwe and is returning for his 3rd year. He started carving stone and wood when he was very young. His Grandfather was his mentor and influencer, as it is common for families to pass the trade of sculpting down to the next generation. Bongo learned to carve with a homemade adze and he began to master his sculptors to exhibits in galleries in both Europe and the USA. He has won multiple awards at chainsaw carving competitions.

Mark was born in Alberta but makes his home in California. He is returning for his 4th year. Mark started carving right out of high school and has been carving for over 36 years. Mark was on the reality show ‘Carver Kings’ which can be seen on Netflix. He was also on many episodes of the reality show ‘Snow Dogs’. Mark has won many awards and enjoys seeing people take his art home.

Tomas is from Slovakia but now makes his home in Washington.  Tomas earned a Masters in Sculpture Restoration from VSVU Bratislava.  Tomas is returning to us for the 3rd year and was one of last year’s People’s Choice Award recipients.  Tomas has been carving full-time since 2008 and has won many awards.  His studio is located in Bellingham.

Denis lives in the wooded hills of Wapwallopen, Pennsylvania. He cut into his first hardwood log in the early 1980s and has been sculpting some of todays greatest woodcarvings. Denis specializes is speed carvings, where he spends 30 minutes on stage with one log and quickly transforms a piece of nature into a piece of art. He has carved wood in New York, Kentucky, Georgia, Germany, Australia and Japan. Additionally Denis has carved ice in Alaska and Austria and went to the Caribbean islands to carve coral. 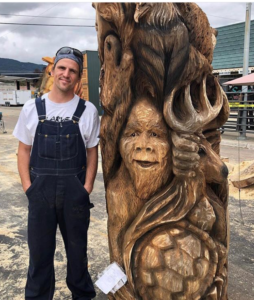 Steven is based in Missouri and is returning for his 4th year. Steven has consistently been king of the auction every event as well as Grand Champion the first year. He has competed in many events all over the United States and won many awards, including a sweep of the inaugural event here in Libby which is considered a Golden Broom Award in Carver World. Steven has over 20+ years of carving experience.

Todd comes to us from Montana and is returning for his 4th year competing. Todd does several types of art including chainsaw carvings, bronze sculptures, pencil, painting, pen and ink drawings. He has sold his chainsaw carvings to people from all around the world. His carvings range from 1 foot to his largest piece of 43 feet tall. Todd has been carving for over 25 years and he has carved most every type of wildlife out there.

Jeff May from Idaho, USA 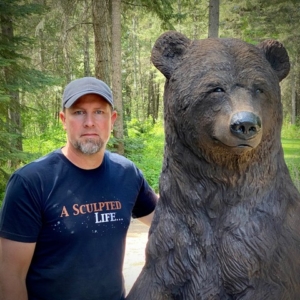 For me, the idea of “carving” has evolved over the years. In the beginning I didn’t really set any expectations and I had know-one to teach me anything, so my experience early on was fairly limited. I had just left the ocean working as a boat captain, because I felt like God put it in my heart to be a family man, which was difficult to do working offshore. A slight curiosity led me to pick up a chainsaw and carve what I new best which was a dolphin, and the rest is history.  Over time, my confidence and passion has grown exponentially , viewing each sculpture I do, as an opportunity to say something different with the quality and expressiveness of the sculptures I make. My very first carvings were done in 1998′ in central Washington state, and shortly there after (2000′) I moved to Northern Idaho and have lived and worked there ever since. Most of my sculptures these days are made directly from my studio and delivered or shipped throughout the USA. I pinch myself everyday ; I feel blessed to be able to do what I love, working mostly from home and raising my kids in such a beautiful area of the country.

Joe is from Pennsylvania and is returning to us for his 4th year. He is a body work artist who takes his passion and creative abilities from painting and airbrush work to the world of chainsaw carving. Joe’s love for the outdoors and nature lends credibility and authenticity to his work. He has performed at many events across the USA and Europe. 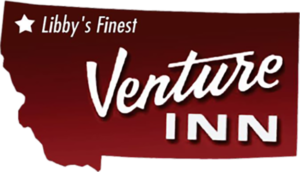 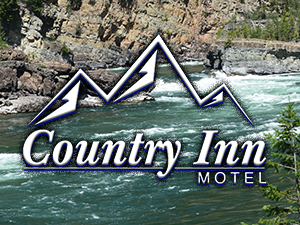